Anybody who makes light of how difficult the identification of these birds is or who claims that it is easy is being rather naive. At the outset, you need to always bear in mind that it is never easy, especially without experience of both, and that good views are required (and, even then, some birds will remain unidentified). Views can be brief and it is necessary to concentrate your efforts on trying to see the diagnostic features that may be present. It is therefore important to know what to look for before you attempt a positive identification.  A telescope is almost essential to see many of the features, unless you are very lucky and the bird comes close.

You should also bear in mind that distant views are unlikely to result in a positive identification.  Thus, don't expect to put a name to every bird you see, especially if the views are inadequate. I personally do not believe that it is possible to positively identify every single ringtail Pallid or Montagu's that you see.  Accept that as a fact from the outset and try to view each bird you see critically.

So, what are the all important features?  The following notes are based largely on the Macmillan Birder's Guide and on personal experience.

The first step in correctly identifying a "ringtail" harrier is to determine the age of the bird.  Adult females and first-year birds are easier to separate than second and third calendar year birds.  Once the age is determined a combination of the following characters may enable identification:

i) underwing pattern (all remiges for adult female, only primaries for juvenile/first-year);

ii) facial pattern (note that there is some individual variation and overlap between the two species); 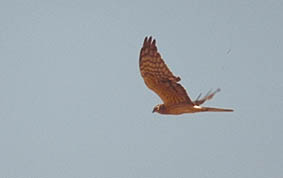 The main characters in order of importance are as follows:

ii) Secondaries - Pallid's secondary region (including greater coverts) looks contrastingly darker than primaries with only one prominent pale greyish band across distal arm.  At close range, Pallid's pale bands clearest on outer arm, tapering and darkening towards body, with rearmost pale band narrower than dark terminal band.  Pallid has three dark bars evenly spaced, but diffuse and not well developed, with inner two narrower than trailing edge. On Montagu's the pale subterminal bar is broad and matches the base colour of the primaries, is evenly thick and pale right to the base of the arm and is generally thicker than the trailing edge.

iv) Underpart Streaking - Most Pallid tend to have dense, bold streaking on the upper breast, but lower breast and belly finely streaked creating a demarcated effect.  Montagu's is more finely streaked over the whole of the underparts, so no demarcated impression. 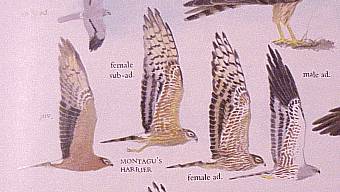 vi) Upperwing - Pallid has a rather dark, plain upperwing (barring normally restricted to primaries), although some have a contrast between darker secondaries and paler primaries.  On Montagu's less contract between arm and hand and barring well defined; usually a diagnostic well-defined dark bar at the base of the secondaries (same place as the dark bar on the secondaries of an adult male). 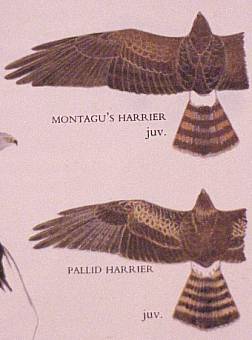 Easily aged by being darker above and largely unstreaked chestnut below, with dark secondaries and strong facial pattern.  Main distinguishing characters in order of importance: 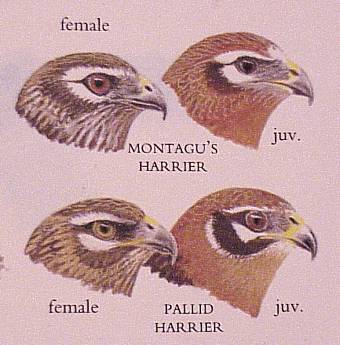 Note that juvenile features are very clear when the birds first arrive in Southern Africa, but the birds become paler as the summer passes.  The feathers become more worn and therefore paler, so the features can become slightly more obscured.  However, the features are still present.

Birds at the end of their second calendar year (i.e. 17 to 18 months or so old) when they arrive in Southern Africa show much variation in the amount of moulted and unmoulted feathers and in plumage patterning.  This results in the birds having a mixture of worn juvenile and adult features.  Very careful observation can reveal the diagnostic features listed above, but some birds defy all attempts to identify them.  Birds of this age are the most difficult to identify and must be left as unidentified ringtails in many instances.

As with females of this age, immature males show a curious mix of worn juvenile and new adult male feathers.  The older the birds get, the easier they become to identify as they become more adult-like.  Again, diagnostic features may or may not be visible depending upon the state of the bird's moult and the views obtained, so be prepared to leave some as unidentified ringtails. 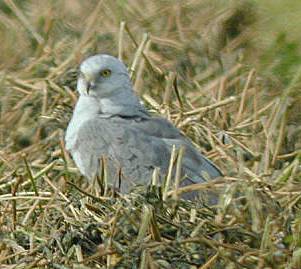 So there you have it.  A nice complex identification challenge.  A lot of people will no doubt feel that it is impossible to see the features I have described in the field.  It certainly isn't easy.  However, with practice, and a knowledge of exactly which features to look for, it is sometimes surprising how noticeable some of the features are and thus how straightforward the identification can be. Always try to see as many features as possible before you arrive at a firm identification.  At other times, a bird may show a bewildering mix of characters and those are best left as unidentified ringtails and put down to experience.

Anybody who is interested in further research should consider trying to obtain one or both of the following books:

i) The Raptors of Europe and the Middle East, by Dick Forsman, published by T&AD Poyser.  A huge amount of detail on all the raptor species of Europe and the Middle East (including Montagu's and Pallid Harriers) and stacks of stunning photos of raptors in flight (illustrating the identification features with photos taken in the field and not paintings).  Dick Forsman is generally recognised as the foremost raptor identification expert in Europe.

ii) The Macmillan Birder's Guide to European and Middle Eastern Birds, by David Christie, Alan Harris and Hadoram Shirihai, published by Macmillan. Deals with the separation of essentially similar species.  Includes great detail on the identification of Montagu's and Pallid Harriers, Steppe and Tawny Eagles, Greater and Lesser Sand Plovers, etc.  Hadoram Shirihai is widely recognised as one of the top field birders and identification experts in the Western Palearctic.

Both of these books go into much more detail than a conventional field guide and are essential for serious birders who wish to get to grips with the identification of  similar species of birds.  They do have a strong bias towards European species, but a fair number of those covered occur in SA, both regular visitors and vagrants.  I don't know if they are readily available in SA, but I suspect not.

Another extremely detailed book by Dick Forsman (co-authored with Philip Burton and with paintings by Ian Lewington) on the identification of European raptors is due for publication next month and will be a companion volume to the book mentioned above.

ZEST for BIRDS would like to thank Paul Wood for kindly providing the text for this article. We would also like to thank Ian Sinclair for allowing permission to use illustrations from the SASOL field guide to the Birds of Southern Africa as well as Alain Fossé and Miel Ferdinande for providing the photographs.


Copyright © 2000 ZEST for BIRDS. All rights reserved.
Designed, constructed and maintained by © ZEST for BIRDS and © Spyderweb Design
(This site is best viewed at 800x600 True Color)